Length: 7-8 mi. (using the early bypass, 12mi for the full Alviso Trail)
Elevation: 258 ft. Gradual.
Time: ~4 hrs
Difficulty: Easy (flat)
Dog are generally prohibited on the trails in this part of Don Edwards (some are allowed on leash in the Fremont region).

Hundreds of thousands of commuters on SR237 pass by the nation’s first urban national wildlife refuge every day. Lined with bustling development for Silicon Valley’s IT companies, the Bay trail and Coyote creek crossing provide hints of what lies close by.

Centuries of hunting, landfill, and development have drastically transformed the San Francisco Bay. Grizzly bears and tule elk once roamed across northern bay estuaries and birds came from all around the world to rest on their migratory routes. Tidal action along with salt and freshwater reactions cause sediments to accumulate at the mouths of feeding creeks and rivers. This in turn allows for a variety of plants and animals to thrive.

Be aware that duck hunting is allowed along the Mallard Slough and you’ll hear quite a bit of racket in the mornings during hunting season.

Common birds you’ll find in this area include the great egret, snowy egret, and the white pelican.

Don Edwards spans the entire south east of the bay with the main visitor center located in Fremont.

Starting with the Gold Rush, hydraulic mining caused massive deposits of sediment to fill in the bay. Further landfill deposition due to dredging and development further shrunk the SF Bay’s wetlands.

At the south side of the bay, Don Edwards provides access to estuaries fed by the Guadalupe river (re-directed to the Alviso Slough) and Coyote Creek outlets.

Remnants of old commercial salt evaporation ponds created by Leslie Salt and later bought by Cargill Corp partition off the refuge and delineate the levee trails.  While Cargill continues to operate in some portions of Don Edwards near Newark (the only evaporation based salt production left in the US) , the areas in the Alviso region are part of the South Bay Salt Restoration Project. This project aims to convert the salt ponds back into their former tidal wetlands. The first step towards reverting the ponds back to their native state is break down their artificial boundaries and allow water to freely move in and out withe the bay tide.

The San Francisco Bay Areas only ghost town, Drawbridge is visible from the Mallard Slough Spur trail. Founded in the late 19th century by the South Pacific Coast Railroad to house operators of two drawbridges, the town’s last resident left in 1979. The drawbridges are long gone, but the railroad still carries Amtrak trains and the city hall is still left standing. 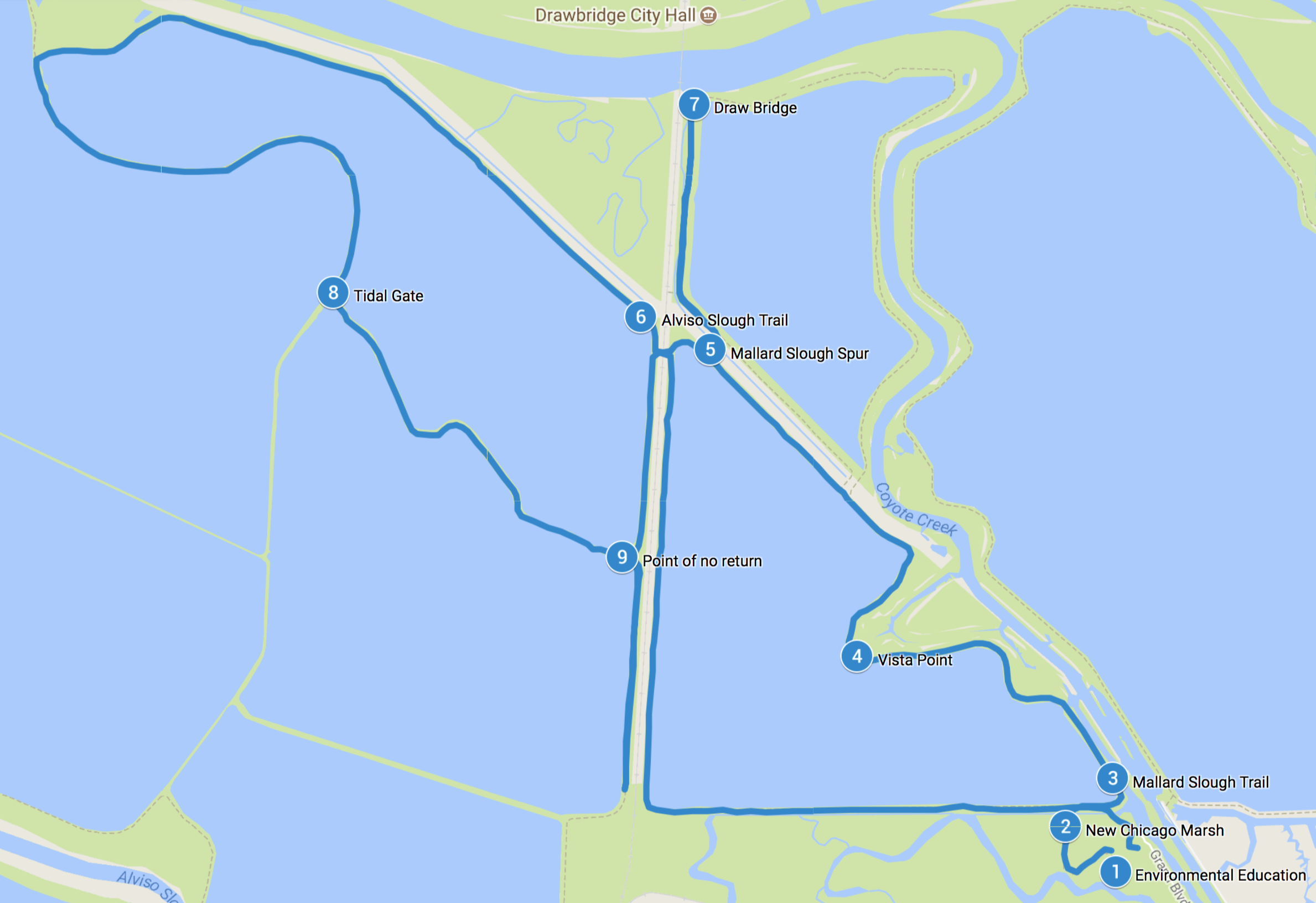 From the East Bay, take 880S to 237W. Take the first exit, Zanker Rd. Zanker will turn into Los Esteros Blvd and take you a few turns past a waste processing and landfill facility. Make a sharp right onto Grand Blvd.

From the West Bay, you can take 237E to 1st street, north (towards the bay). Make a right onto Grand Blvd.

Be aware that duck hunting is allowed along the Mallard Slough and you’ll hear quite a bit of racket in the mornings during hunting season.

The Environmental Education Center is the starting point of the New Chicago Marsh trail. This short trail is on a boardwalk which brings you over the marsh.

After this pleasant stroll, you’ll come across the Mallard Slough Trail. Make a right here.

The Mallard Slough trail brings you around roosting pelicans, and swaths of cat tail grass that lines the Mallard Slough. Duck hunters loiter in this area on their boats during hunting season and shotgun shots can be heard occasionally cracking through the air.

A small bulge in the trail forms a small peninsula, providing an immersive view of the wildlife resting on the tiny islands in the salt pond that are popular with the white pelicans.

With any amount of time spent in the refuge, you can’t fail to notice the Amtrak trains that still operate through the area.

The spur trail brings you along the railroad tracks to the Coyote creek outlet and the last remnants of Drawbridge.

Ath the end of the spur trail, the Coyote creek flows by on its way into the bay. Across is the former city hall of Drawbridge.

The land across the creek is no longer open to the public. Guided tours are occasionally available by Ceal Craig who has a great slideshow here.

The Alviso slough is the current outlet of the Guadalupe river which was diverted from it’s original outlet (the Guadalupe slough) to allow for easier access by boats. The 8.6 mi trail runs along the outer edges of the Coyote creek, to the Alviso Slough and then back again along the railroad tracks. A bypass through the salt ponds (which we took) allows for a much shorter alternative.

These tidal gates allowed the salt harvesting operators to control the water levels and salinity within the ponds. With the estuary restoration in progress, these gates should be locked open to allow natural tidal actions to propagate throughout the wetland. 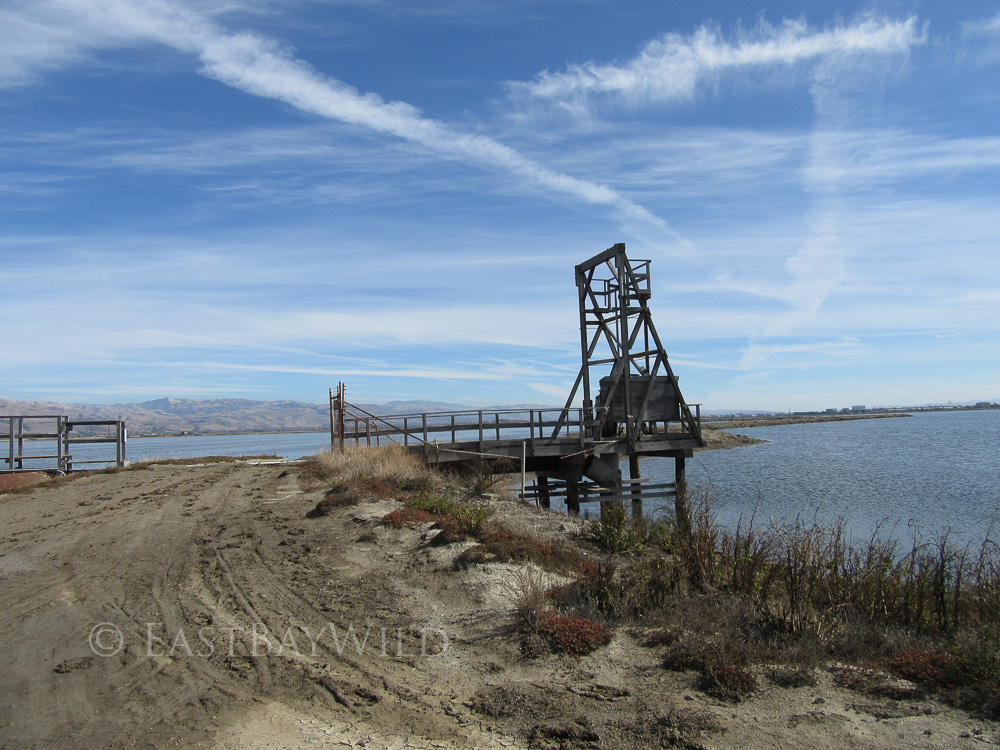 9. Point of No Return

Joining the Alviso Slough and the Mallard Slough trails is only the one connector near the Mallard Slough spur (that diverts to view Drawbridge). To return to the Education Center, make sure to turn left at the railroad tracks. Although the Mallard and Alviso trails both run parallel to the railroad tracks, there is no way to cross between the two at any other point. Turning right, while offering some nice views of Levi Stadium, will bring you to Alviso Marina. 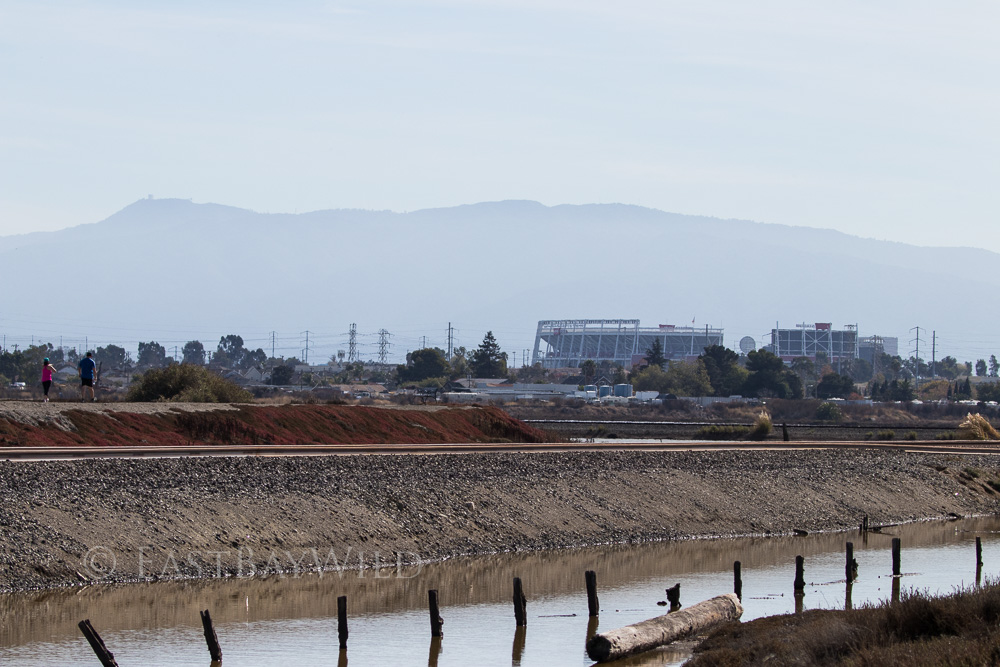