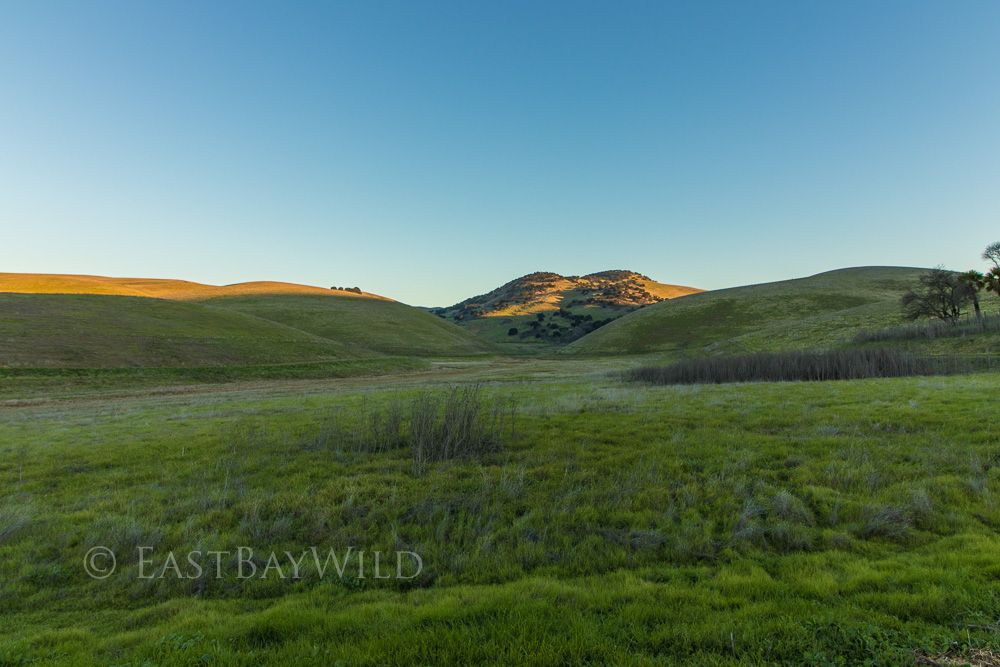 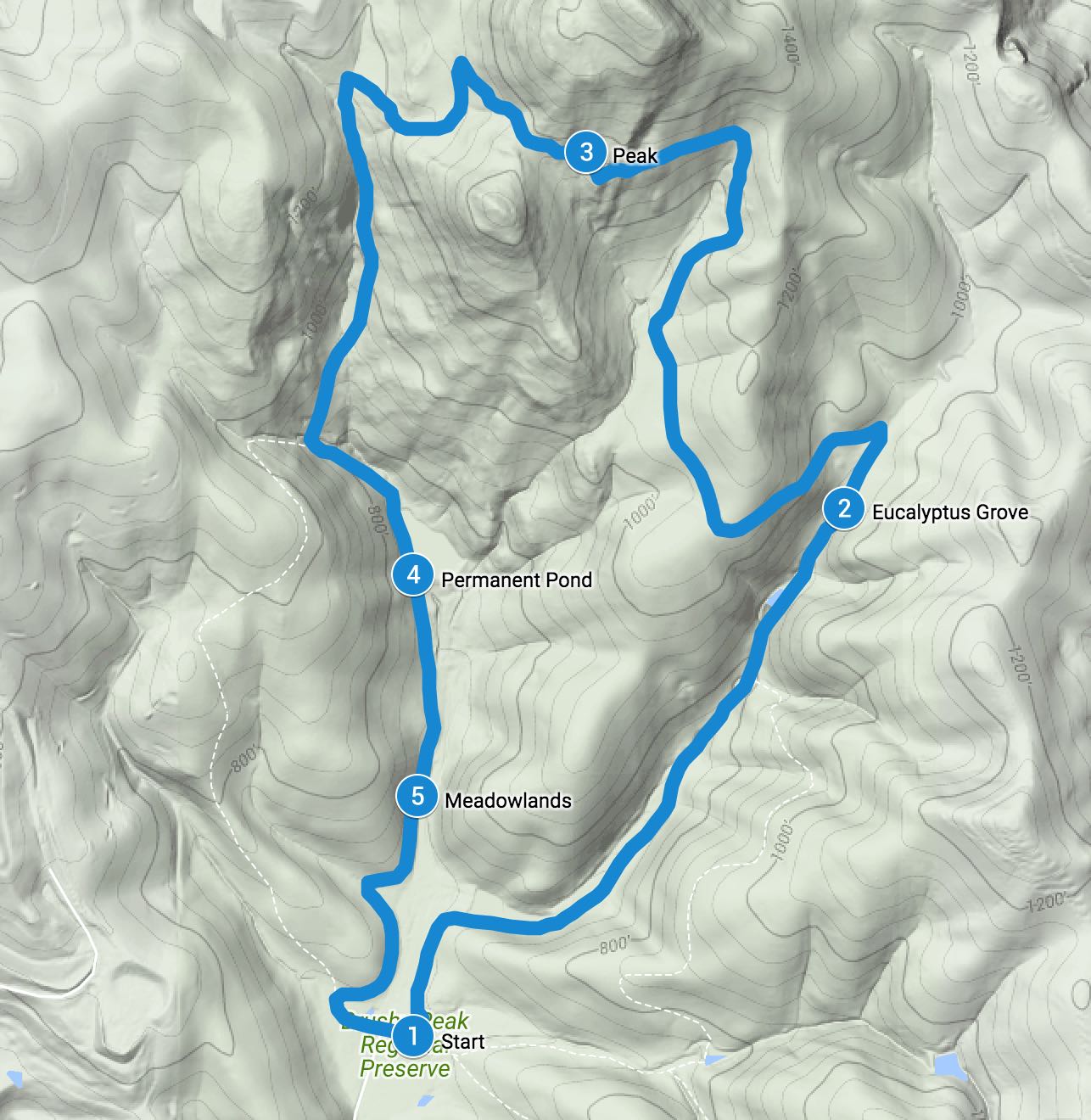 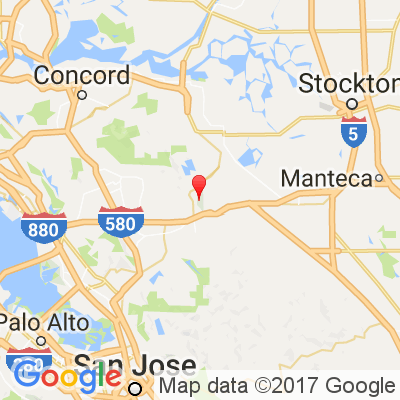 Brushy Peak Regional Preserve is easily accessible on the North side of I-580 off of the Vasco exit in Livermore. It features rolling hills, ample wildlife, and varied terrain to suit the mid level hiker. Morning or Evening times provide striking views of golden casts over the downtown Livermore valley as well as the popular peak used for gatherings from the time of the native Americans. Trail runners, bikers, and dog walkers all enjoy this hidden gem of Livermore.

While only offering a limited set of hiking trails, the area offers some of best raptor viewing in the bay area. Red tailed hawks, golden eagles, harriers, and falcons can be readily seen in the varied landscapes surrounding the peak.  The surrounding windmills in the area take advantage of the constant valley breeze which helps keep the summer temperatures tolerable but are bone chilling during the winter months. A windbreaker is advisable in the early morning summer season and a heavier jacket is advisable during the fall-spring season.

Existing Vasco road coming from 580, proceed north towards Brentwood and make a quick right onto Northfront Road. Past a couple dealerships and open ranch land, turn left at the Laughlin road intersecion. Laughlin road winds past an upscale community to the west of the seasonal Frick lake and narrows down to a single lane road.

After a short time warp past horse ranches and nostalgic farm equipment, you’ll arrive at a large parking lot open at 8:00AM-8:00PM in the summer and 8:00AM-5:00PM in the winter. The gate is on a timer for entrance but is always open for exit (beware the nasty one-way tire puncturing backup teeth preventing people from entering through the exit without peril to their vehicles). They seem to not adjust for daylight savings so its possible to enter at 7:00AM during winter times. There’s also a few parking spots along the road shoulder located outside of the parking lot for those who want to partake during the off hours.

There’s a main loop trail which goes through the peak and a couple side trails which can be incorporated into the loop trail to extend your overall hike or add some variation for repeat visitors. This guide documents the most direct route up to the peak along the Brushy Peak loop trail and coming back down the eastern leg of the Western Side Loop Trail. 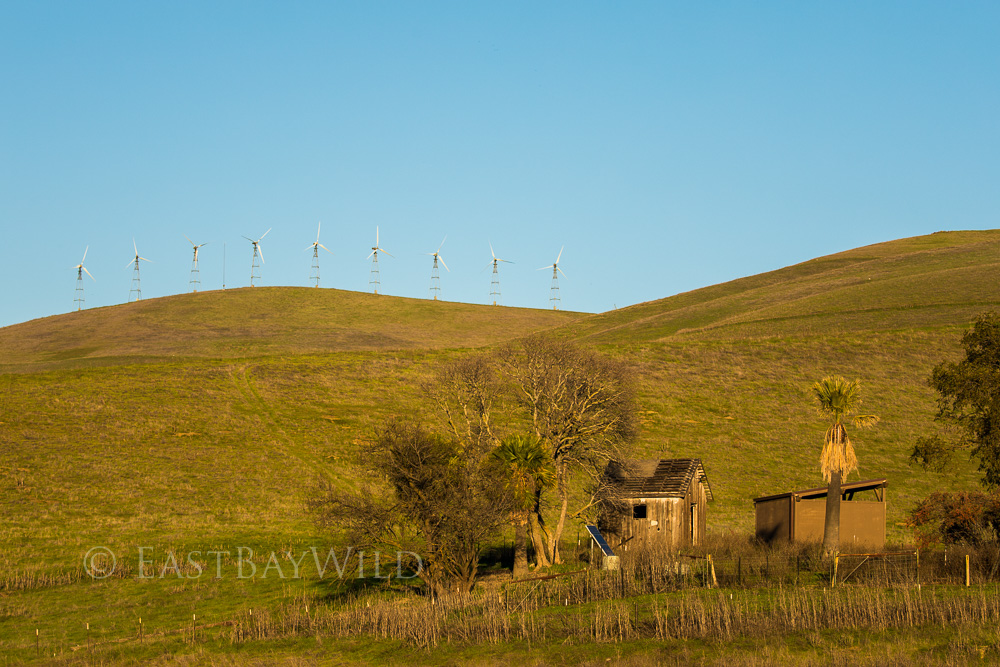 Entering through a cattle gate along the ranger’s residence edge, you’ll start yourself along the Brushy Peak Loop trail which passes by meadowlands and a water retention zone which runs dry during the late summer and autumn months.

Running up alongside a mostly dry creek bed, raptors often perch directly on the hillside, waiting for their furry meals to rise from their burrows. 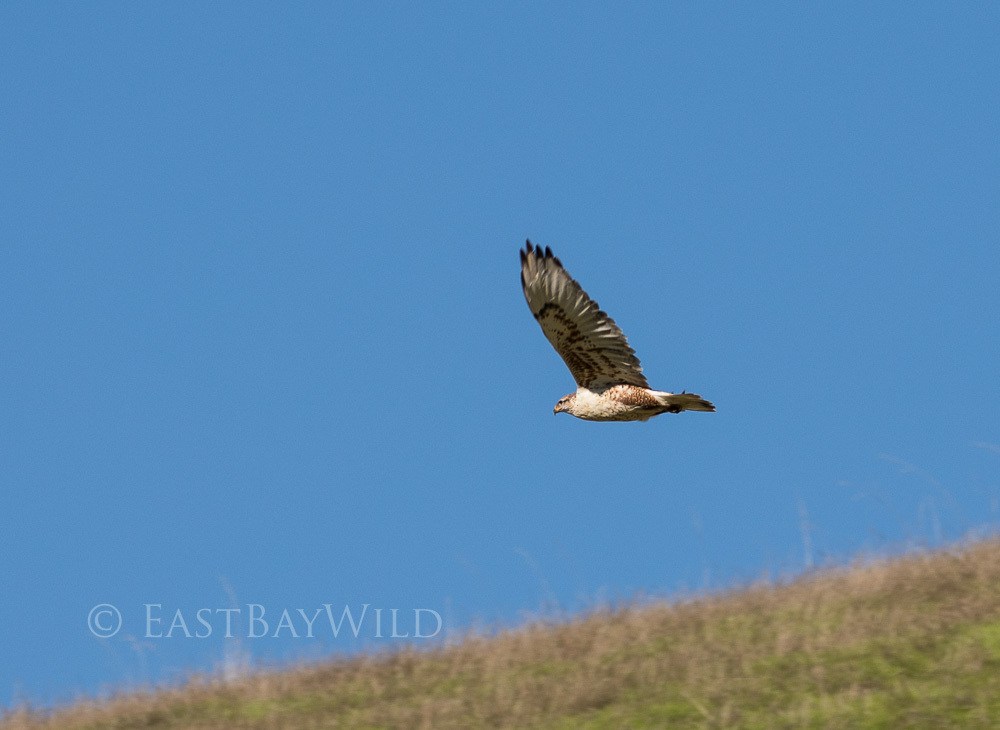 The trail follows the eastern section of a seasonal drainage channel that approaches a set of eucalyptus trees frequently populated by perched raptors. 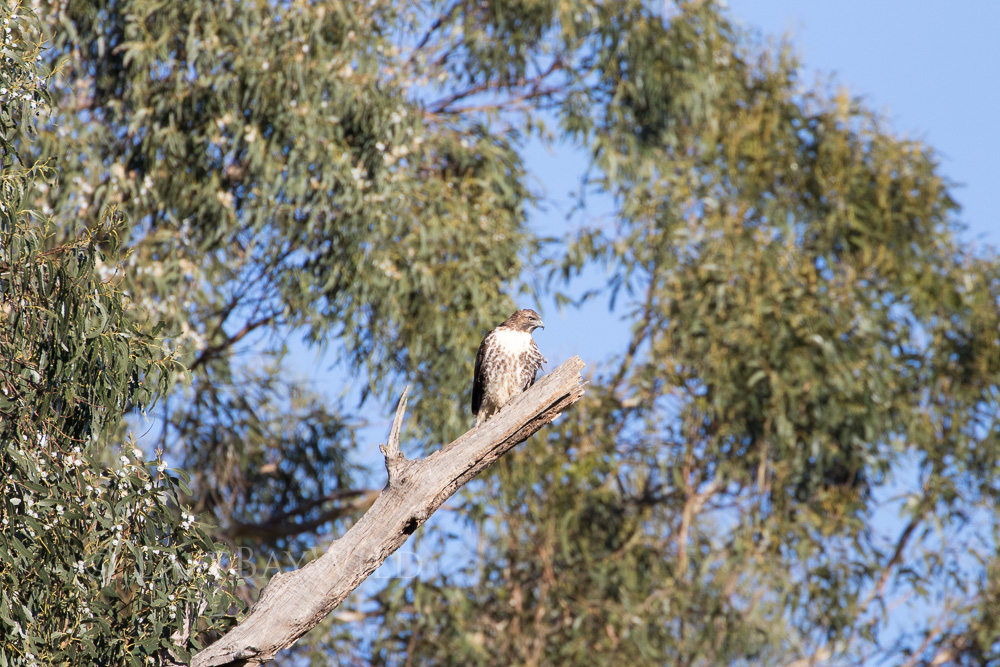 Around the sharp bend past the eucalyptus, you’ll get a view of the grassy hills frequented by coyotes scouring the hillsides for bite sized meals and sometimes resting in the morning glow. 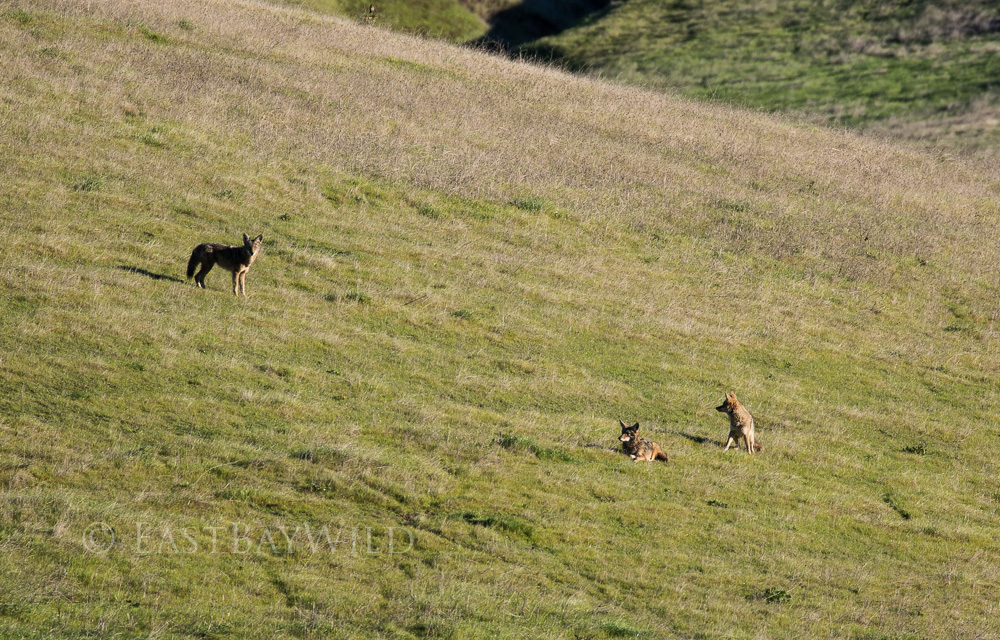 Beginning the main ascent towards the peak, you’ll frequently come across scurrying squirrels of Brushy Peak. 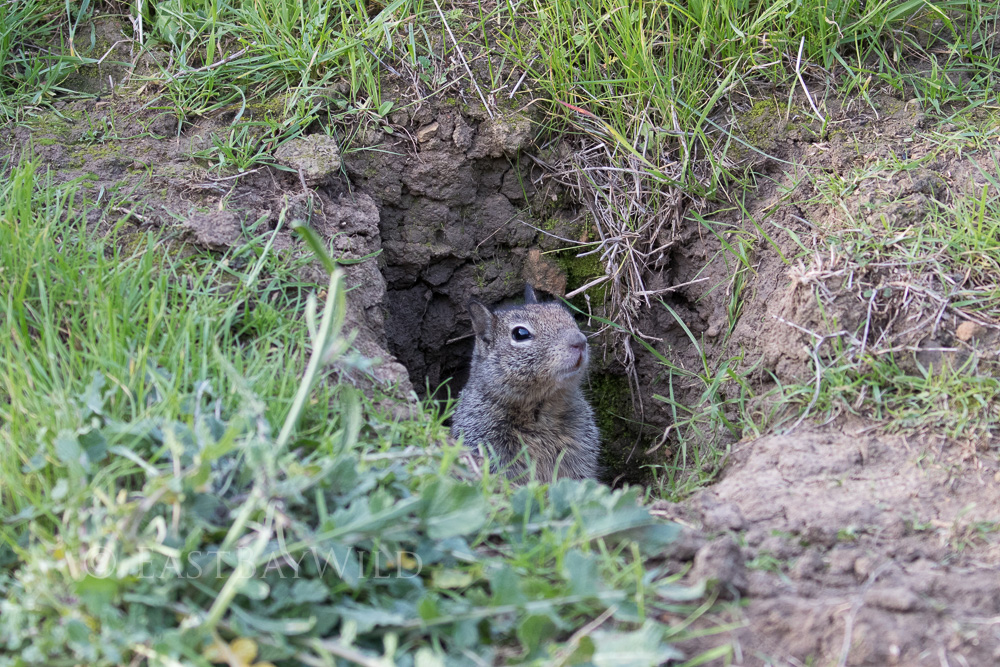 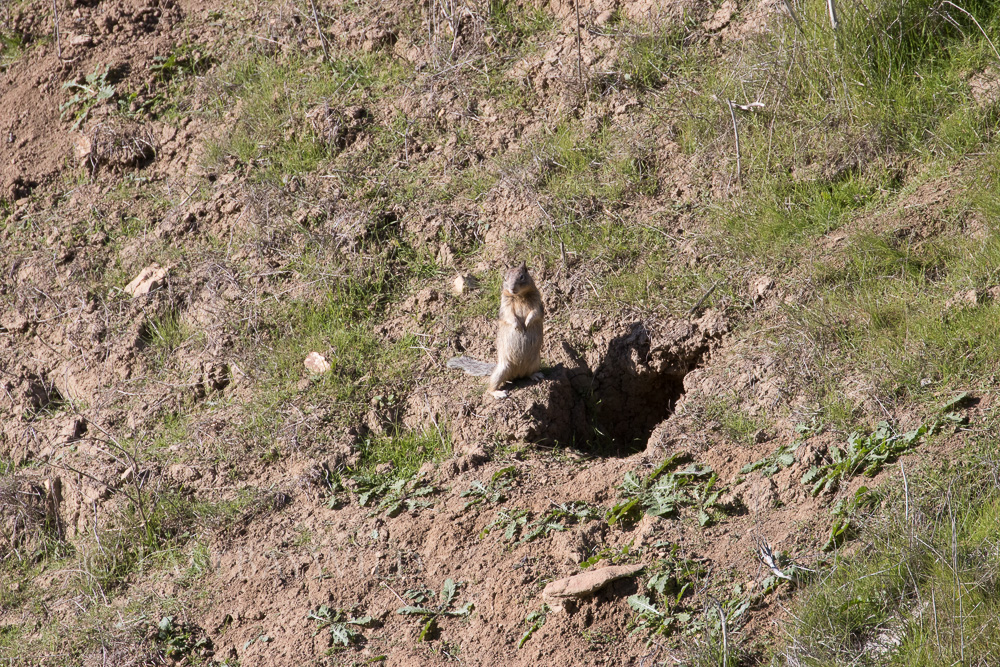 Following the trail behind the eucalyptus grove, there’s a steep ascent which will bring you to one of the first of many spectacular views over Livermore valley. 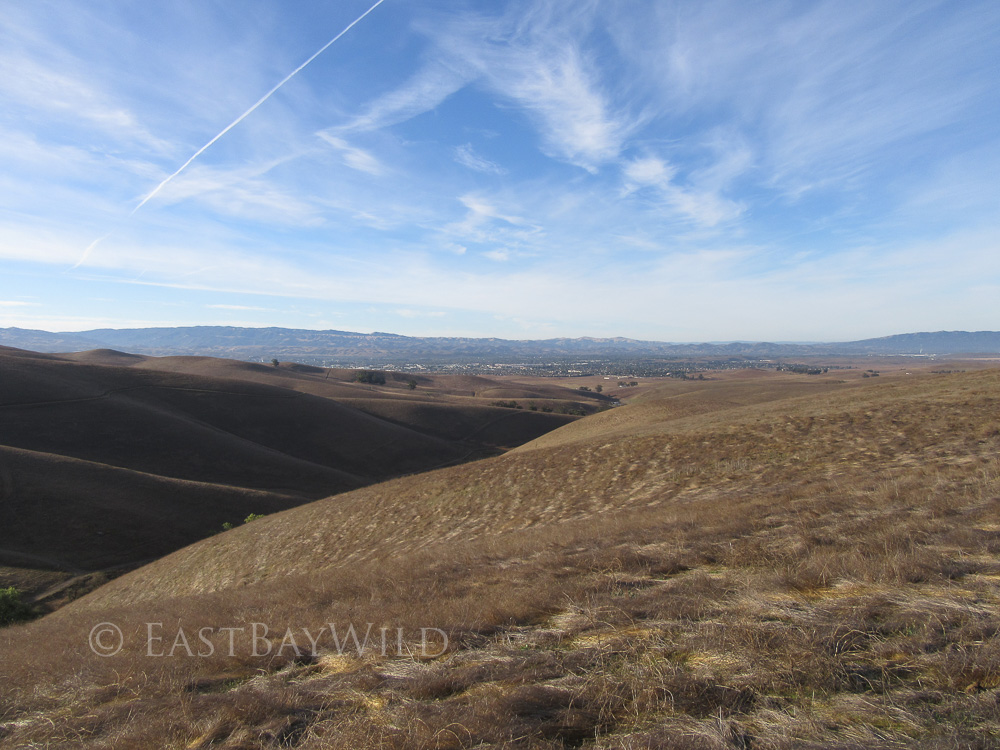 Approaching the peak, the landscape begins to change from open grassland plains to the rocky outcrops exposing pieces of the geologic history of Brushy Peak. 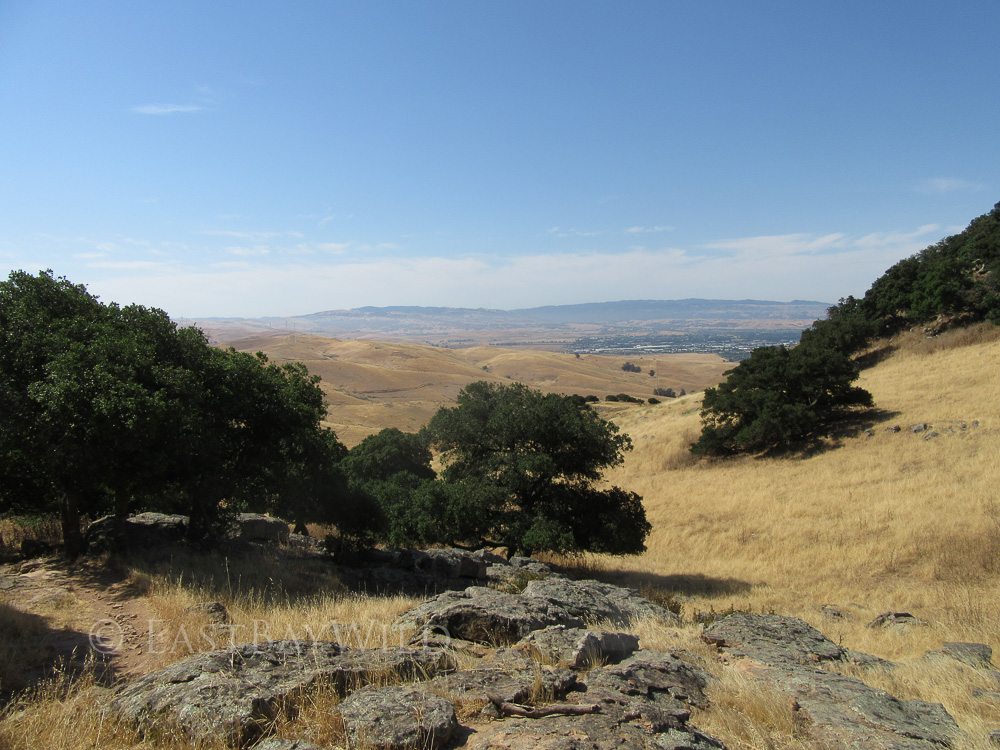 The brushy areas of the peak are actually live oak trees that dot the landscape. Slow growing and native to California, these old trees provide ideal perches for red tailed hawks. As you make your way through the shaded areas of the peak, it’s not uncommon to stumble across one quietly minding its own business. 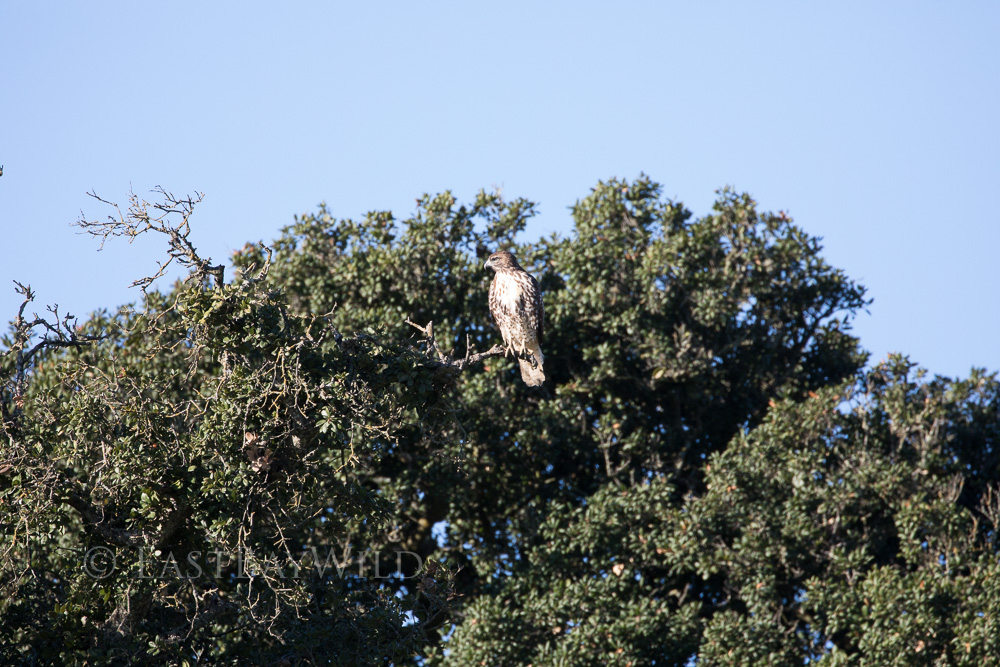 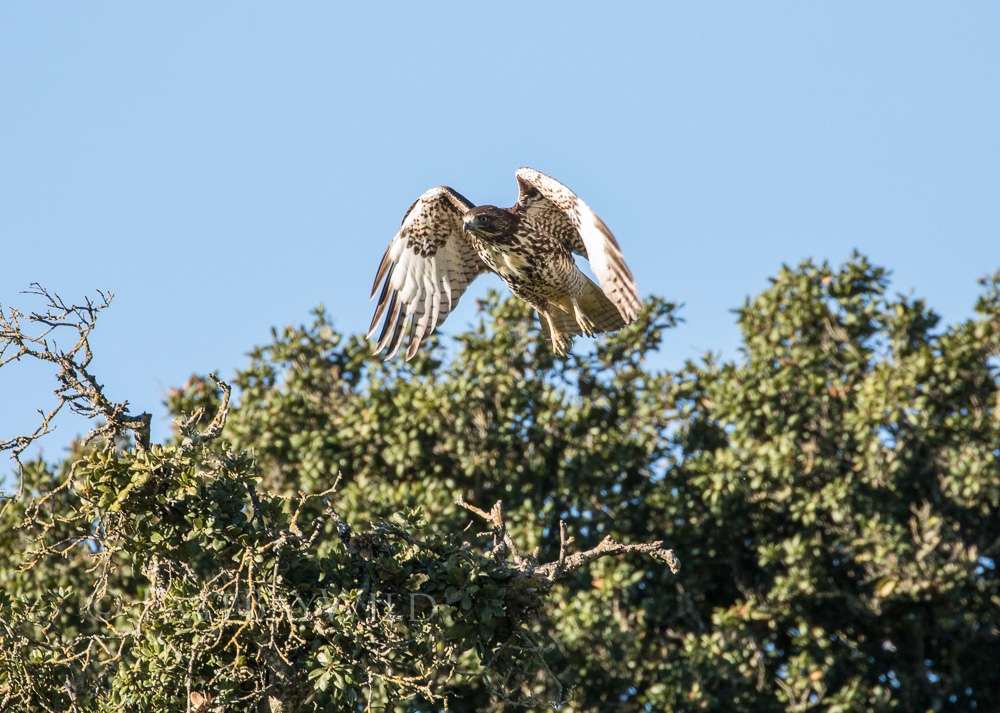 The loop trail doesn’t actually go to the very top of the peak. Access is by guided tour only. Check the East Bay regional park page for tour info.

After traversing across rocks and underneath live oaks at the base of the peak, the trail will start to descend on the western side.

While descending, keep an eye upwards for Golden eagles circling around the air thermals of the peak.  It’s easy to mix them up with the more common turkey vultures that are commonly seen throughout the bay area. But zooming in reveals a golden head dress and the symmetric white patches underneath the wings.

The trail eventually meets with a drainage channel that feeds into one of the few permanent ponds in the area. Year round, ducks, frogs, and salamander can be spotted in reeded outskirts of the pond. At this point the trail forks to either the upper or lower sides of the West Side loop trail. I typically follow the lower side past the pond and through a meadow. The upper side offers a slightly more strenuous workout along the edge of the park border. 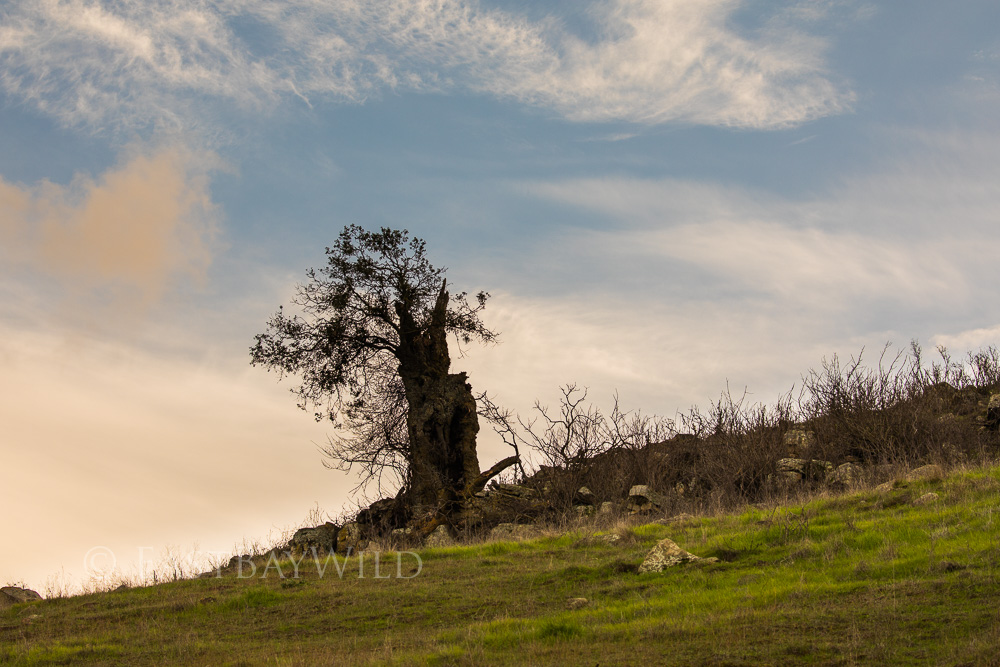 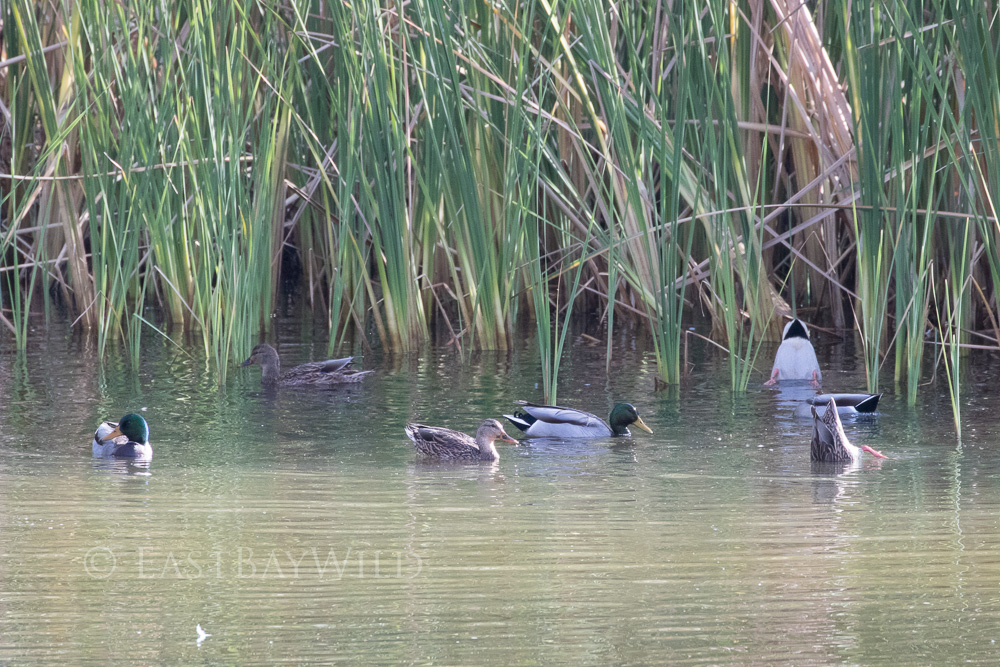 Past the pond is a large meadow frequented by white tailed hawks looking for a meal.

Towards the end of the trail is a pair of trees, providing ample shade where rabbits often forage for food. 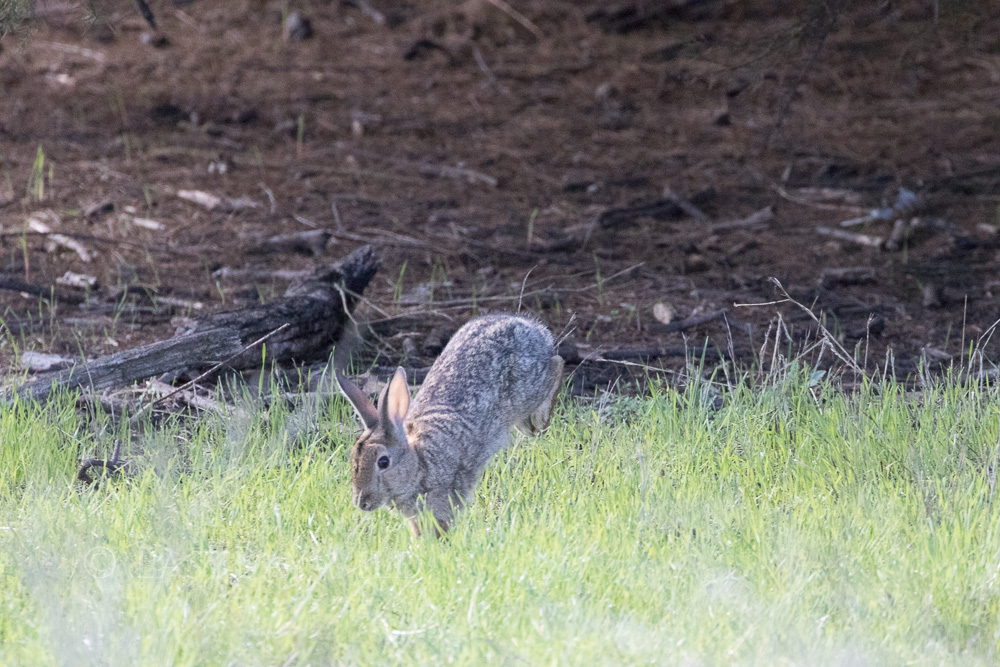 The last leg of the trail toward the cattle gate passes a hillside frequented by northern harriers which can be seen gliding immediately overland. Occasionally, they can be seen perched on the ground. 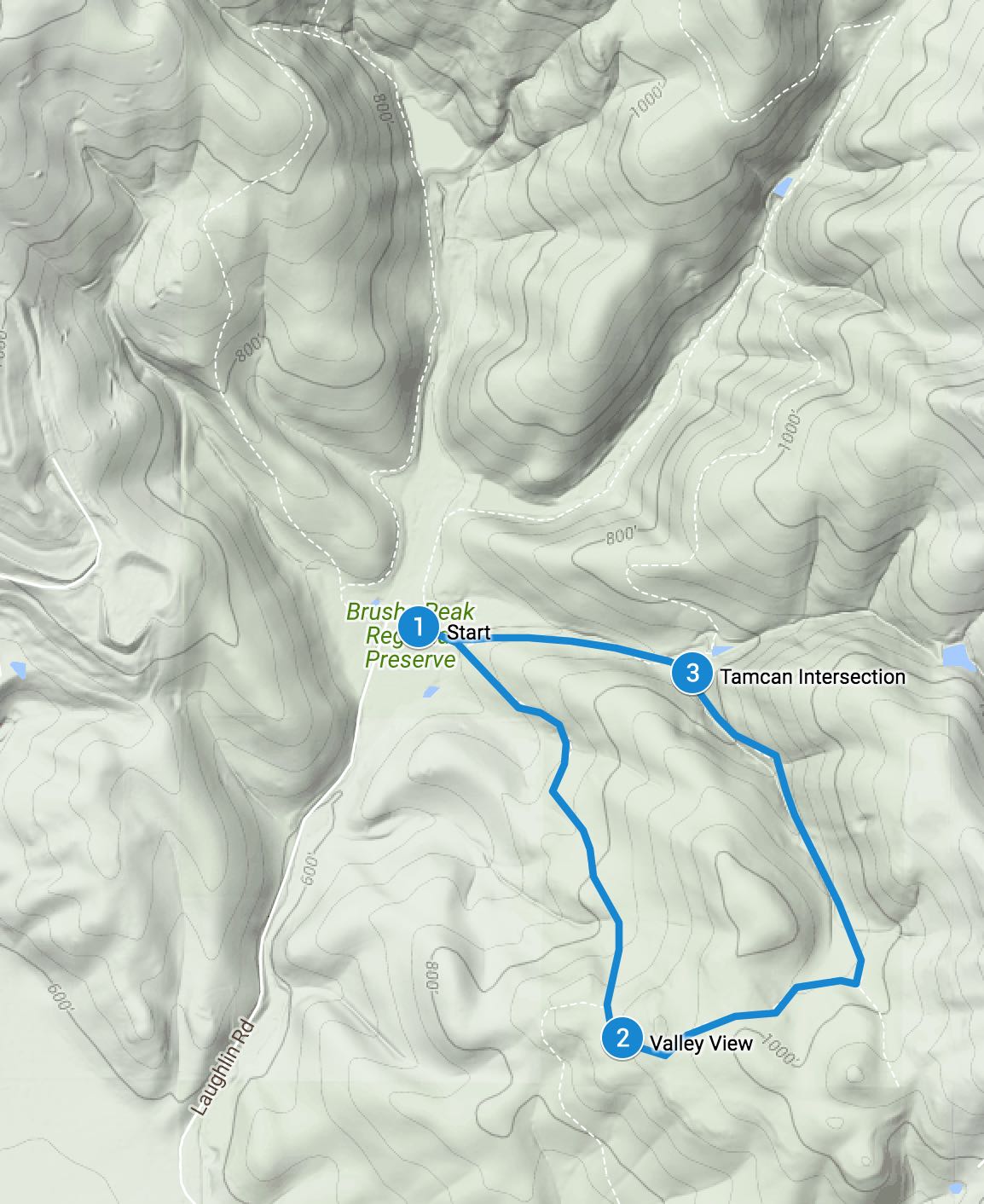 In addition to the main loop trail, the Laughlin Ranch Loop trail can either be used as an alternative starting point in conjunction with the Tamcan trail to extend the Brushy Peak loop trail by two  miles or be used as a shorter alternative to the peak trail. It features fine views of the valley and unique glimpses of raptors hugging the hillsides and swooping down on unsuspecting prey.

The trail begins by ascending over the hillsides next to Laughlin road, then arriving at a junction with the Dyer Ranch trail. Make a left to stay on the loop trail.

Eventually, the trail begins to descend through a small valley frequented by harriers and falcons flying over the crest of the hillsides. The clump of trees towards the later half of the descent is also a popular spot to perch.

With such a great density of raptors, its not uncommon to find them defending their airspace. These birds demonstrate amazing aerial agility, flying in inverted positions with talons extended.

Once the descent is complete, you can either make a left and complete the loop back to the parking lot or make a right and take the Tamcan trail. 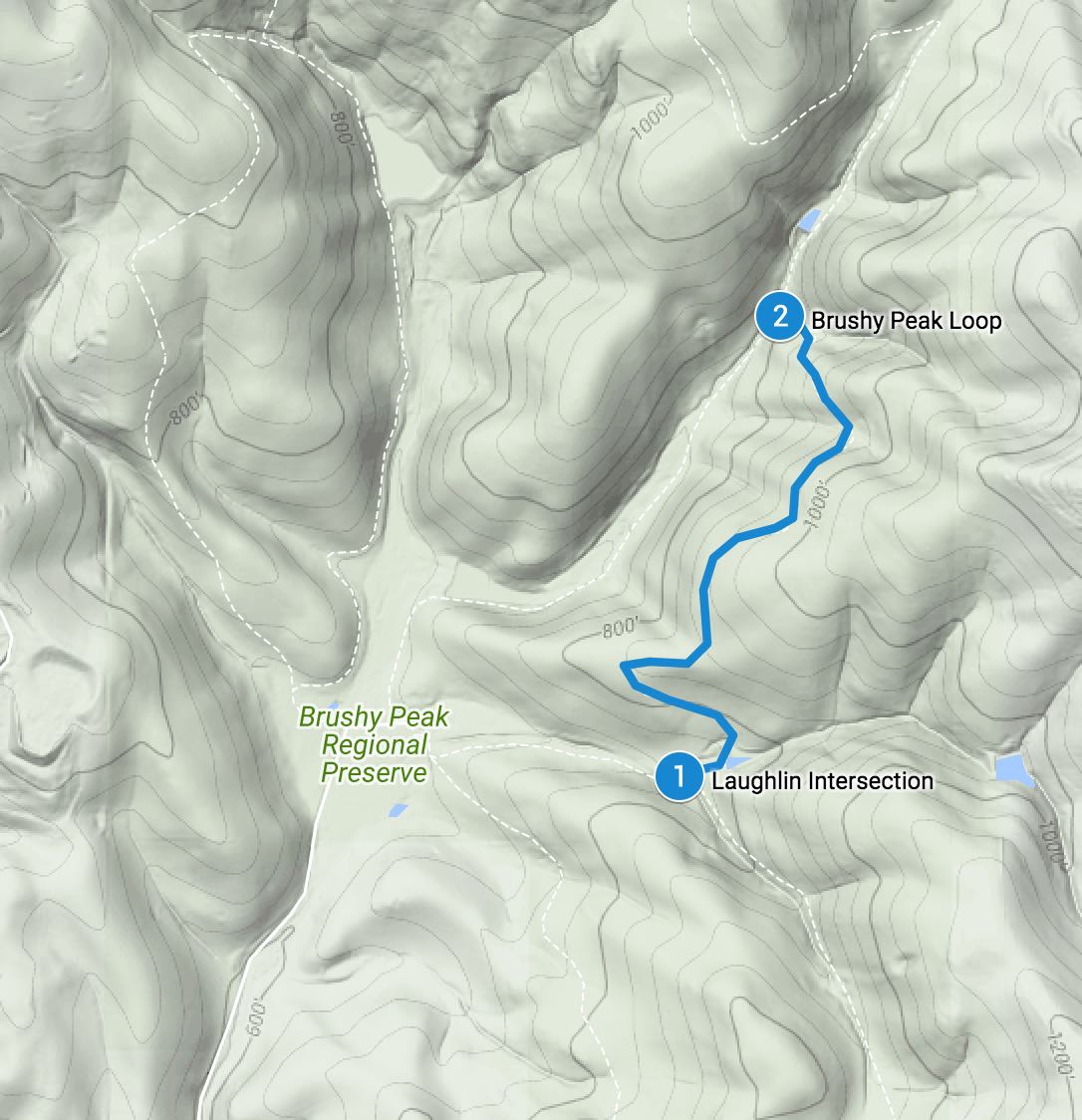