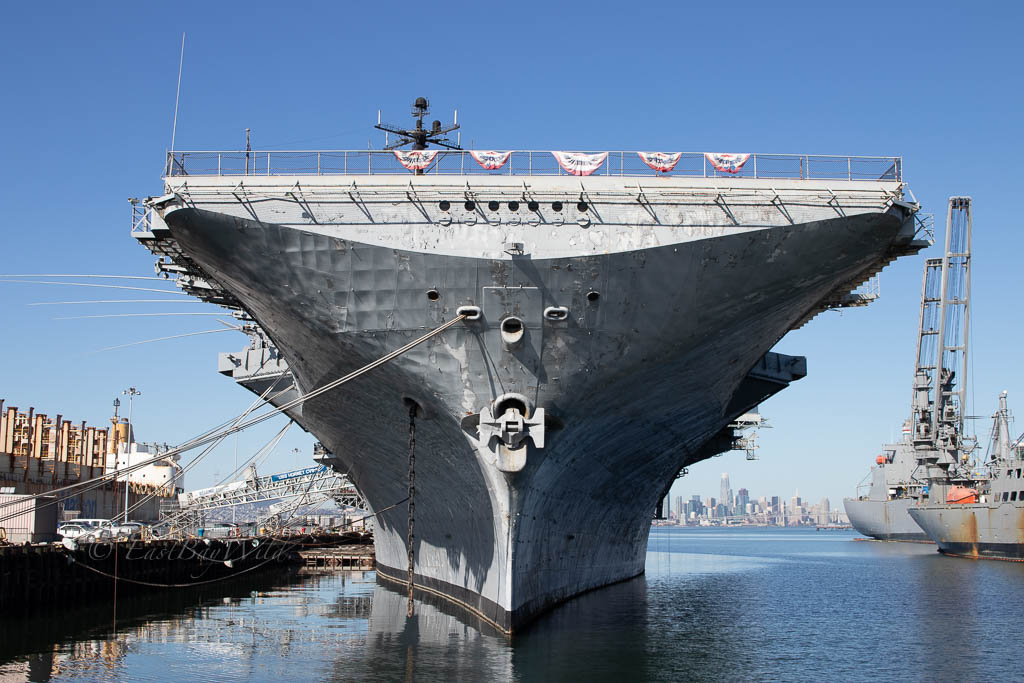 While the navy base on Alameda has been closed since 1997, the USS Hornet WW II aircraft carrier and museum has carried on the Navy’s presence. With Fleet Week approaching it provides a great opportunity to take a peak into aircraft carrier life (it had a crew of ~2500 people while current Nimitz class carriers have 2x) and catch great views of the San Francisco skyline.

Starting life as a WW II aircraft carrier, it spent nearly 30 years in active Navy service. After a storied record throughout the Pacific, the ship ended its final years aiding NASA as the primary recovery vessel for the famous Apollo 11 and 12 moon landing missions.

The ship is formed by several accessible decks. The wide open flight deck is almost like a steel floored soccer field. The 2nd deck below is a maze with narrow hallways, low ceilings, and sealable doors every 20 or so feet. All kinds of nooks and crannies ( with special exhibits ) lie waiting to be discovered.

The entrance ramp leads into the hangar deck where planes were stored and maintained. It now houses various historical aircraft, NASA Apollo and Gemini space program exhibits, the gift shop, and a virtual simulator ride.

Below the hangar deck are the main living spaces. With so many people on extended missions, these ships formed miniature cities complete with post office, chapel, and hospital facilities all crammed into a large metal hull.

Catch the breeze and gaze on the San Francisco bay from the flight deck.

Situated on the flight deck, the Island houses the captain’s quarters, bridge and command center for the ship. Access is allowed only through free tours that are conducted throughout the day.