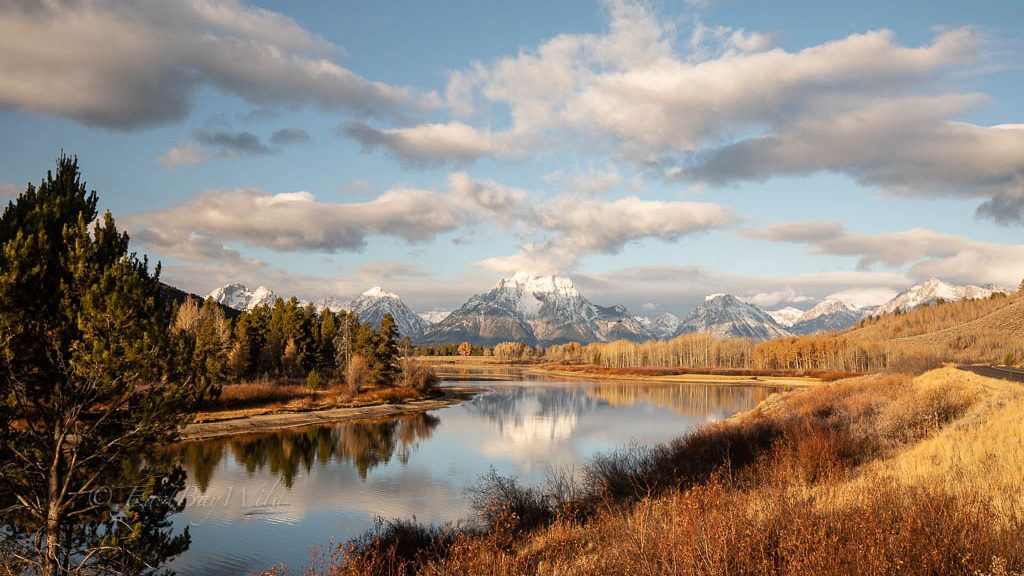 What better place is there to take a fall vacation than America’s first national park? I took a weeklong trip visit Grand Teton and Yellowstone national parks in October of this year. The first time I visited Yellowstone (back in 2017), I flew into Bozeman and missed Grand Teton. For this trip, I did the long drive across Nevada and Idaho which allowed me to lug additional camping and wildlife viewing gear.

Why October? In additional to fall colors, October is the time of the elk rut when bulls bugle to attract mates and ward off competitors. Bears are also active this time of year foraging in order to fatten up for winter hibernation. A major reason is simply to avoid the massive crowds which heavily detracts from the experience with nature.

Grand Teton National Park was spectacular for its scenic vistas of the Tetons with various foreground settings depending where you are at in the park: Barns on Mormon row, the Snake River on Oxbow bend, or Jackson lake at Coulter bay.

Moose were plentiful around the southern end of the park, near the Craig Thomas Visitor center. During this time I found them around Moose-Wilson road, Gros Ventre river, and the Black tail ponds.

Bison and pronghorn were also plentiful in the ranges between the Antelope flats and Gros Ventre road. I didn’t spend too much time lingering around them as they are plentiful in Yellowstone.

On top of being a famous photography spot, Oxbow bend is also a great place to spot water birds and mammals like beavers and muskrats.

Mammoth campground supports both tents and RVs. Tent camps (which I used) can be identified by a sandbox area where tents can setup. RV spots, by contrast, only have a pull through driveway.

The main downside of the campground is that it’s situated by the roadside, nestled in the hairpin right before the Mammoth Hot Springs center. You might think you can escape the road in the latter campsites (a one way road loops through all the sites), but you can’t. I camped in spot #64 but if I had to do it again, I would have just chosen something closer to the bathroom like #55 or #21.

Having recently read American Wolf, by Nate Blakeslee, my main objective in Yellowstone was to see wolves. If you haven’t read it already, it provides a background on the reintroduction of wolves to Yellowstone as well as the history of some of the most famous wolves and packs.

The book also provides an introduction to the wolf watchers Rick Mcintyre (a retired Yellowstone ranger), Doug McLaughlin, Laurie Lyman and the Yellowstone wolf project lead, Doug Smith. I had the opportunity to meet all of them and chances are good you can run into some of them in the Lamar Valley during the morning (see tips below).

One of the additional motivations from driving vs flying for me was the discovery that it’s possible to do the trip in a single day. There’s also a one hour time difference so depending on the direction, you’ll lose or gain an hour.

During October, I encountered some heavy snow falls and snow covered roads. 4WD and snow tires are pretty much required if you go during times when snow is likely; one reason the summer season is so crowded.

Getting to Jackson, WY

This route was ~910 miles, and took 14 hours including stops for gas.

Getting to Yellowstone from Jackson

Unfortunately, due to snow storms and road closures throughout Yellowstone, I had to go all the way around through Bozeman adding 2x the distance and time.

By the time I was scheduled to leave, the road down through Madison and West Yellowstone had opened, allowing me to save some time and distance.

While the time spent in Grand Teton felt about right, my time in Yellowstone felt too short. Perhaps this was due to the my feeling that Yellowstone offered more in the way of wildlife, whereas Grand Teton mainly offered scenic vistas. The snow in Yellowstone also slowed things down and cut my stay there by a day.

I’m hoping to return in the early spring, before Memorial Day (which kicks off the busy season). Hopefully, the weather will be less snowy with an abundance of pups, cubs, and calves bounding about!